Abstract
We determined the audiogram of the Jamaican fruit-eating bat (Phyllostomidae: Artibeus jamaicensis), a relatively large (40^50 g) species that, like other phyllostomids, uses low-intensity echolocation calls. A conditioned suppression/avoidance procedure with a fruit juice reward was used for testing. At 60 dB SPL the hearing range of A. jamaicensis extends from 2.8 to 131 kHz, with an average best sensitivity of 8.5 dB SPL at 16 kHz. Although their echolocation calls are low-intensity, the absolute sensitivity of A. jamaicensis and other ‘whispering’ bats does not differ from that of other mammals, including other bats. The high-frequency hearing of A. jamaicensis and other Microchiroptera is slightly higher than expected on the basis of selective pressure for passive sound localization. Analysis suggests that the evolution of echolocation may have been accompanied by the extension of their high-frequency hearing by an average of one-half octave. With respect to low-frequency hearing, all bats tested so far belong to the group of mammals with poor low-frequency hearing, i.e., those unable to hear below 500 Hz. 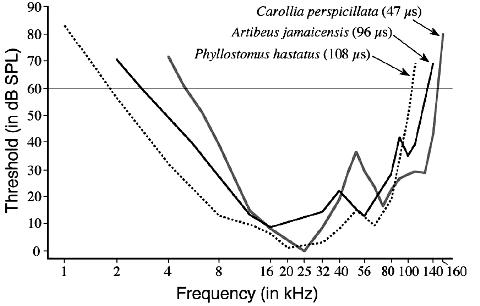