a sound installation and performance, by Maxime De La Rochefoucauld

This installation is about music performed by automatons: mechanized acoustic sculptures animated by inaudible frequencies. Their oddly organic polyrhythms are orchestrated to produce a ritualistic trance-like music.
The automatons are activated by high and low inaudible frequencies. Those frequencies drive the membranes of little woofers* on which a structure made out of sticks and springs is attached. The structure hits acoustic instruments like drums, cymbals, strings, bells, cans, etc.
All the automatons are controlled individually by an impulsion board. This impulsion board is like a traditional mixing board. But instead of an audio volume, it is the electrical power of the impulsion given to the automatons which itself generates an acoustic sound. This impulsion board has 24 faders which receive different impulsions and 24 outputs connected to an amplification tower.
*Some of the automatons are activated by soleno•ds.

“…When the trumpet gets going, the sound is almost on par with electric Miles Davis; the whole manner in which this beast is assembled brings to mind zany sculptor Jean Tinguely…” Mike McGonigal, Raygun

“… The ethnic polyrhythms flow in and out of a linear structure, laying the groundwork for shadowy, inscrutable soundscapes. Drones and washes swim through the ether behind the drums, occasionally pierced by metallic crashes or atonal howls and flares. Seductive, hypnotic and frequently frightening. A resounding success.” Rupert Bottenberg, Mirror 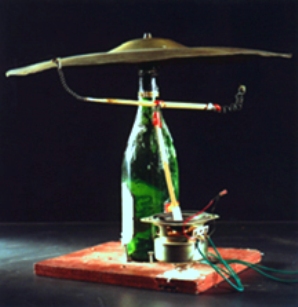