This interctive website called soundcities.com allows the audience as creative user the possibility to remix the hundreds of samples recorded from around the world and then save their own mix. Soundcities is an online database of the thousands of sounds from around the world. The website also has series on online mixing desks where you can mix these sounds. Soundcities uses city recorded soundscapes from world cities made over the last five years. All the sounds are now online also online as open source sounds. The database allows full open sourced access and listening to the individual sounds. The Database is also open so anyone can upload sounds they collect from world cities, thereby making a contribution to the project and making an online sounds archive.

SOUNDCITIES DATABASE: An online open source database of city sounds from around the world, that can be listened to, used in performances on laptops, or played on mobiles via wireless networks. Initially all sounds by Stanza you can now contribute your own found sounds. This is was the first online open source found sound database. First version 2003. New sounds added 12.12.06. Enter to listen or add your own sounds.

URBAN MUSIC: AUDACITY: The sounds of the street as a generative audio cacaphony. Multiple streaming players from city to city off the database.

SOUNDCITIES CD: AS MP3 Online download release: I tried to rework all the found sounds into finished compositions.

SOUNDMAPS. The first Version mixing desks made in 2000.

SONICITY: A generative audio mixer that morphs the sounds as you listen. 2000

EMERGENT WORLD : This online visual artwork updates images from cctv and webcams around the world in real time with sounds from around the world being randomly played from the soundcities.com database via XML stream.

// a project by stanza 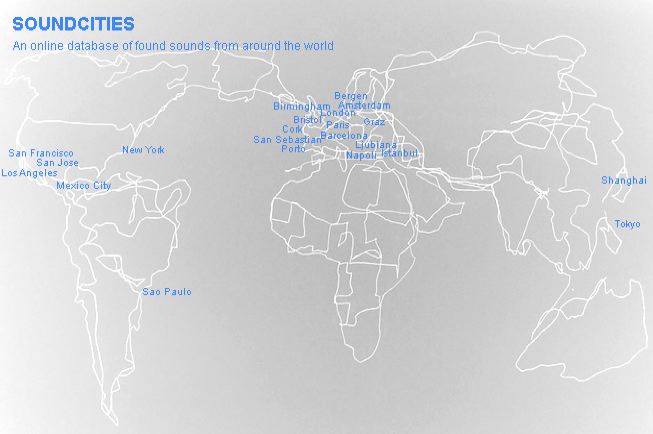