Scanned Synth VST is the first VST plug-in to implement “Scanned Synthesis” – until now, this new synthesis technology has only been available to users of Csound and Max. Scanned Synth VST is a revolutionary musical instrument as well as a tool for creating sounds that have never been heard before. Many have described using it as a totally refreshing experience, inspiring whole new pieces of music or avenues of experimentation. What’s more… It’s totally free!

Scanned Synth VST is only available for Microsoft Windows-based PCs.

Scanned Synthesis represents a powerful and efficient technique for animating wavetables and controlling them in real-time. Developed by Bill Verplank, Rob Shaw, and Max Mathews between 1998 and 1999 at Interval Research, Inc. it is based on the psychoacoustics of how we hear and appreciate timbres and on our motor control (haptic) abilities to manipulate timbres during live performance. 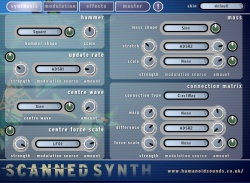