Jonah Brucker-Cohen has just released an OS Wifi Liberator Toolkit designed to liberate Pay-Per Use wireless networks and create a free, open node that anyone can connect to for Internet access.
“The project is presented as a challenge to existing corporate or “locked” private wireless nodes to encourage the proliferation of free networks and connectivity across the planet.” Like the Wifi-Hog project, “the Wifi-Liberator examines the tensions between providers trying to profit from the increasingly minimal costs associated with setting up a public network and casual users who simply want to see the Internet transform into another “public utility” and become as ubiquitous and free as the air we breath. The project targets pay-per-use wireless networks as often found in airports, other public terminals, hotels, global-chain coffee shops, and other public waiting points.”
An important feature is that Wifi Liberator only allows a person to connect to the Internet if they share their connection, thus stopping people from using the Liberator to “leech” the connection only for themselves. 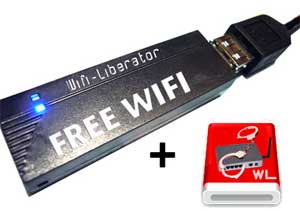