Micromontage technique allows the composer to work a musical figure point by point, shaping each sound particle with microscopic precision. The software presented in this paper combines graphic and script editing with algorithmic generation and manipulation of sound sequences. It provides several tools to enhance both creation and organic development of the musical material under this compositional paradigm using a user-friendy visual environment.

Generally speaking, micromontage technique consists of the extraction of sound samples from sound files and then rearranging them in time. Each extracted sound sample can be multiplied and transformed through operations like speed variation, filtering, panning and amplitude envelope editing (Roads 2001). These very simple sound processing operations are typically enough to build a wide-ranging sound catalogue. Chosen groups of samples from the pre-composed catalogue are then arranged in time into more complex sound structures on a higher time scale that can subsequently be also transformed and multiplied through several variation operations (Vaggione 1995; Vaggione 1996). This kind of compositional approach calls for a working environment that is able to keep track of all important sound operations.

Taking into consideration that sound transformation, far from a mere “effect”, is an act of composition, a memory of all actions and respective data involved within the process of creating the tiniest sound particle is needed so that a consistent proliferation of the musical material can be achieved. All data concerning sound manipulation is therefore stored and accessed through IRIN’s graphic interface. IRIN was designed to offer control over micro-time and macro-time levels of composition, allowing the composer to browse smoothly between them with an analogous outlook towards musical material. 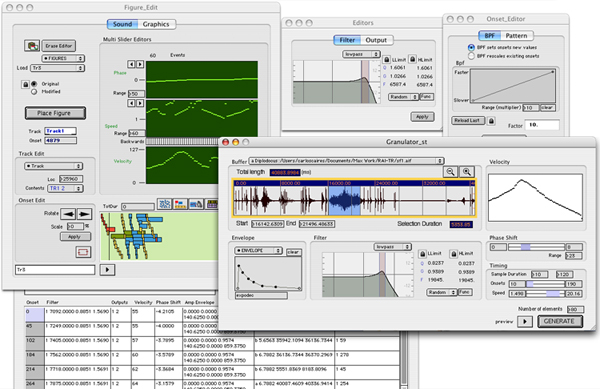