Literal:
Daniel R. Raichel, a mechanical engineer and an expert on acoustics who studied how sound travels in symphony halls and across industrial workplaces and wrote a leading textbook on the subject, died on Dec. 22 in El Cajon, Calif. He was 71.

The cause was melanoma, his family said.

The roots of much of Dr. Raichel’s work were in his life experience; his own hearing had been severely impaired since childhood, and he wore hearing aids throughout his life.

Dr. Raichel had taught acoustical theory and noise control at Cooper Union and the Pratt Institute in New York City and worked as a consultant on sound in the aerospace and electronics industries. He was interested in understanding how sound carries through urban locales and in developing ways to help dampen excessive noise.

His book, “The Science and Applications of Acoustics” (2000), was intended for graduate students and covered the field from the propagation of sound waves to human perception of music and vibrations. It also addressed the effects of architecture on sound, how it behaves underwater and how musical instruments work. 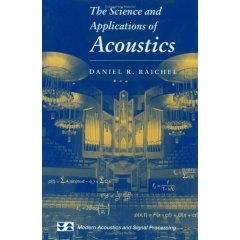