Literal:
Musical instruments have long been on the cutting edge of technology, often spurring new research and development. At Princeton, we have been exploring ways in which the computer can be integrated into conventional music-making contexts (chamber ensembles, jam sessions, etc…) while also radically transforming those contexts. This has involved developing new speaker systems that have a more instrument-like presence, human-computer interfacing designs that involve performers physically the way musical instruments do, and software [1|2|3] to link the performer’s bodies to sound.

In the past, we have explored these ideas with small groups of people (2-3), and in the Fall of 2005 we initiated the Princeton Laptop Orchestra to extend these ideas to larger groups (15), using the orchestra (in a very general sense) as a model.

The Princeton Laptop Orchestra (PLOrk) is a newly established ensemble of computer-based musical meta-instruments. Each instrument consists of a laptop, a multi-channel hemispherical speaker, and a variety of control devices (keyboards, graphics tablets, sensors, etc…). The students who make up the ensemble act as performers, researchers, composers, and software developers. The challenges are many: what kinds of sounds can we create? how can we physically control these sounds? how do we compose with these sounds? There are also social questions with musical and technical ramifications: how do we organize a dozen players in this context? with a conductor? via a wireless network?

In its first year of PLOrk’s existence, composers and performers from Princeton and elsewhere developed new pieces for this unprecedented ensemble, including Paul Lansky (Professor of Music at Princeton), Brad Garton (Director of the Columbia Computer Music Center), PLOrk co-founders Dan Trueman and Perry Cook, and several graduate students. We have made extensive use of a new music programming language created by Princeton graduate student Ge Wang called ChucK, which allows the performers to develop new code in performance. In our first major performance (April 2006, Richardson Auditorium) we were joined by the renowned tabla virtuoso Zakir Hussain, legendary accordianist and composer Pauline Oliveros, and the exciting young percussion quartet from New York City, So Percussion. PLOrk was featured in the April issues of the MIT Press Technology Review and Wired Magazine, and performed at the Dartmouth College “Orchestras of Sameness” festival in May 2006. 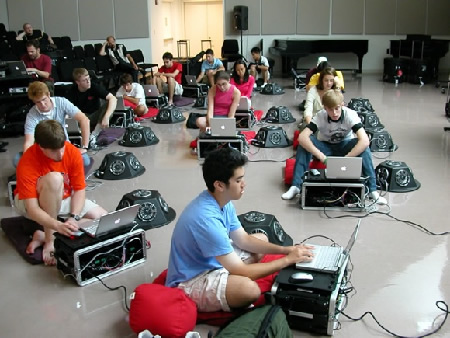