The Sounds of Spacetime

In the biggest events in the universe, massive black holes collide with a chirp and a ring. Physicists are finding ways to listen in

Of all the habits shared by ancient and modern people, stargazing may be the most serene. When we look up at a clear night sky, or view the fabulously beautiful pictures of stars and galaxies coming from the Hubble Space Telescope, we enter awestruck and humble into a magical realm that has the sacred hush of an ancient cathedral or a great art museum. We almost feel we should keep our voices down and turn off our cell phones out of respect.

So how would you feel if suddenly, as you quietly admired a dark and starry sky, you heard the stars making all kinds of crazy noises?

After the initial shock of being jolted out of your poetic reverie, I think you would find that the universe felt much more immediate, present, real and alive. It is one thing to see flashes of lightning in the distance, quite another to be shaken by the sound of rolling thunder. Hearing the universe is more like touching than looking. Happily, astronomers are finding ways to do that—to feel as well as see the active universe around us.

Einstein’s theory of spacetime tells us that the real universe is not silent, but is actually alive with vibrating energy. Space and time carry a cacophony of vibrations with textures and timbres as rich and varied as the din of sounds in a tropical rain forest or the finale of a Wagner opera. It’s just that we haven’t heard those sounds yet. The universe is a musical that we’ve been watching all this time as a silent movie. 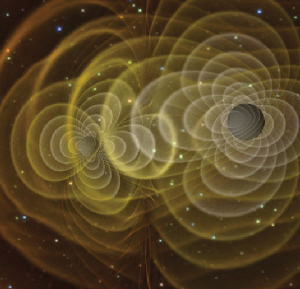