In the summer of 2005, Sasha Harris-Cronin invited me to participate in the Simnuke show she and Max Carlson curated at the Rx Gallery in San Francisco. The show was just part of a larger project exploring the themes of nuclear arms and the atomic age on the anniversary of the Trinity tests.

I struggled for some time with the question of how to approach so profound (and hence almost banal) a subject matter.

In the end, I found direction in the impossibility of asking a sound installation to address such complex abstractions; instead, I turned to what gives my field recordings their emotive force: that they evoke a very particular, very concrete experiential moment.

My installation, Desert Sun, was built around a single recording (made specifically for the piece) of forbidding warning signs rattling in a harsh desert wind outside the Nevada Test Site.

Viewers were instructed to don a safety blindfold and sit in a chair between high-quality speakers playing the recording at its original volume. A full spectrum heat lamp was focused on the forehead of the participant (who in its ultraviolet glare might eventually sunburn). A fan behind the chair reproduced the gusting of the recorded wind.

The intent was to recreate as closely as possible the sensations of being, eyes closed, in the bright afternoon of the high desert. 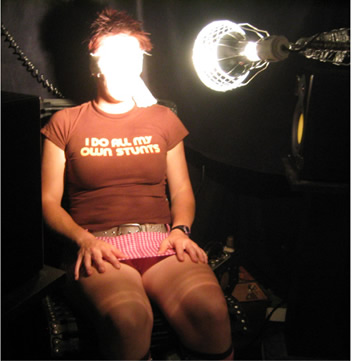