This month the Warp Works and 20th Century Masters concert visits Paris, for its first performance in over a year. Also an album of the collaborative work between Warp and the London Sinfonietta is due to be released.

Born at the Royal Festival Hall on 10 March 2003, the London Sinfonietta / Warp concerts grew out of a shared desire to explore the connection between the electronic experimenters on the Warp label and the avant-garde 20th Century pioneers.

The resulting collaboration visits Paris for an evening of boundary-blurring musical juxtapositions. A live electronic performance by Mira Calix and tracks by APHEX TWIN, Squarepusher and Boards of Canada arranged for the ensemble share the bill with classics by Ligeti, Nancarrow and Reich, conducted by Martyn Brabbins.

Live recordings of earlier performances at the London’s Royal Festival Hall, Brighton Dome and the Liverpool Philharmonic Hall will be released as a 19 track double CD collection, Warp Works and 20th Century Masters, on Warp on September 18th. 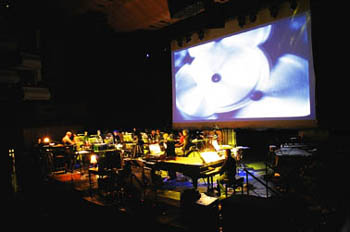