In 2006 the Música Viva Festival celebrates its 12th edition, once more affirming the vitality and diversity of contemporary music composition, since culture and art make up, after all, the principal quality that makes us human beings and that distinguishes us… because they identify us.
As usual, the Festival includes a vast range of initiatives, functioning as an integrated project of fomentation and dissemination of musical composition, and not merely as a collection of concerts; particularly noteworthy are the pedagogical aspects, the events aimed particularly at children (such as the Electroacoustic Theatre), the programming of works by Portuguese composers still awaiting their first performances, even though they were written some time ago, the Electroacoustic Composition Competition, which will give rise to a concert including the prize-winning works and also the commissions given by Miso Music Portugal to various Portuguese composers, and which during the course of the Festival will receive their world premières.
Following the main lines of programming developed in previous editions, the Festival will once again provide a large space enabling the circulation and comparison of ideas and aesthetics, a point of convergence of music and technology, of the instrumental and analogue realm with the virtual and the electronic, with established names side by side with the youngest generation of composers and performers in a total of fifteen concerts – from large groups to the emblematic concerts of electronic music by the Loudspeaker Orchestra, and including chamber music, electroacoustic opera, voice, video…
Fifty works will be performed, forty of which will be receiving their Portuguese première, seventeen their world première. Amongst these, twenty of the works to be performed are by Portuguese composers, including fourteen world premières, an undeniable proof of the prolific creative activity current in Portugal, to which the Festival gives space. 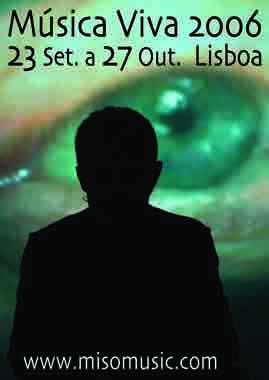