The Electronic Music School of the Istituto Musicale Vincenzo Bellini of Catania was created ten years ago and is the only one of its kind in Sicily. Despite its short existence, the course has already given important results under the guidence of Alessandro Cipriani. This CD includes a selection of their compositions and represents an historical record as well as a means for diffusing the work carried out during the program’s first 10 years. 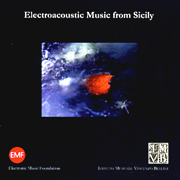