“In the 1950s there was very little access to western music in the USSR so people had to rely on records coming into the country from eastern Europe where limitations were less strict. As a result the influx of records coming in from beyond the iron curtain was very small and of course made the records themselves very expensive.

To compensate for this a group of enterprising and technically inclined people learned to make copies of these recordings with a converted phonograph. The cheapest and most available material to make these copies on turned out to be discarded x-ray plates and in only a few years millions of duplications were created and distributed throughout the country. These copies would only last about five months but were also only about one-fifth the price of an actual record so became very popular.

The process became known as ‘Roentgenizdat’ and was unfortunately shut down and made illegal in the late 1950s but thankfully many of these old recordings still exist today in private collections all over the world like the two pictured above”. 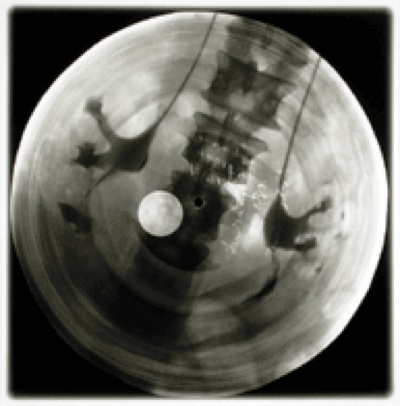