“Public Broadcast Cart is a shopping cart outfitted with a dynamic microphone, a mixer, an amplifier, six speakers, a miniFM transmitter and a laptop with a wireless card. The audio captured by the microphone on the cart is fed through the mixer to three different broadcast sources […] he Public Broadcast Cart is designed to enable any pedestrian to become an active producer of a radio broadcast. The cart reverses the usual role of the public from audience to producer of a radio broadcast and online content. As the government and the FCC seek to hand over our media resources to the wealthiest corporate media entities looking to monopolize the media from print to radio to television, it is upto the independent producers to subvert big money domination of our culture […]” 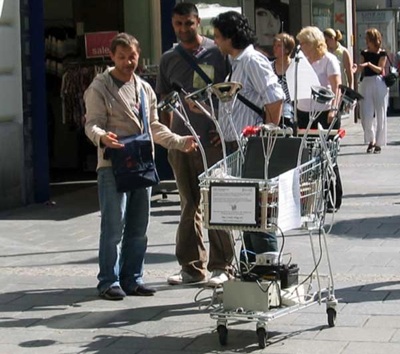