Literal:
The mother of all transistorized vocoders, prototype of early 70´s custom built for german electronic duo of that period:
documented by back cover photo of KW’s album “Ralf & Florian” and in some part in the artwork on inside sleeve.
The device was used for two studio productions, title “Ananas Symphonie” including synthetic vocals and rhythm track in conjunction with lapsteel guitar and rhythm machine , as well for “Kristallo” with rhythm machine and EMS-Synth.
Later used to sound the KW’s intro for “Autobahn”
The vocoder contains 12 analysis and synthesis filter channels, 2 compressors for speech or carrier signal and excitation signal inputs, voiced /unvoiced detector and switch board for filter-matrix.
It was conceived , built and constructed by electronic engineers in the area of Physikalisch-Technische BundesAnstalt (PTB) Braunschweig, Dipl.Ing P.Leunig and Dipl.Ing. K.Obermayer.
Later the well known german music studio engineering and supplier company R.Barth K.G.,Hamburg, Germany, boiled down the know-how gained from this project into so called MUSICODER which was produced in small quantities. 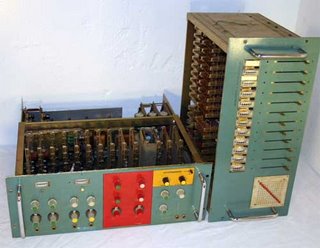