A Neural Mosaic Of Tones

The brain filters what we hear. It can do this in part because particular groups of neurons react to specific frequencies of sound. Neurobiologists from the Max Planck Institute for Biological Cybernetics in Tübingen have now created a “frequency map” for numerous areas of the brain. They used magnetic resonance imaging to identify which neuronal fields are activated by single frequencies and by mixtures of frequencies (PLoS Biology, June 20, 2006).

Our brain decides what we hear. Even in loud environments – like a factory with rattling machines, or a party with music and a cacophony of people talking – we are able to pick out the voice of our conversational partner. Neurophysiologists still do not fully understand how we do this. But they do know that the cochlea is mapped out in certain areas of the brain, and like the retina, this mapping is point-for-point. Thus, in interpreting our environment it is important for the brain to separate sound into its constituent frequencies. That means that particular sound frequencies best activate certain groups of neurons in the auditory cortex. Scientists have used electrophysiological and anatomical studies to determine which areas of the brain are responsible for certain frequencies – but mainly in animals, like those of the macaque monkey. 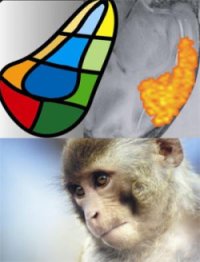