Sounds pass between and around, through and against, to condition the interactions and conversations of daily life. As an energetic matter, sounds give animation to the material realities surrounding while also traveling distances, relating us to horizons of spectral imagining and social becoming. Sounds are dynamically relational, affording escape routes with others as well as gestures of compassion and sharing. As Les Back states in his book, The Art of Listening, a “sociological listening” is needed to create a space for the excluded and the marginal, for those that do not always have a voice. This may be extended to recognize how listening is an everyday practice shaping the ways in which friends and strangers may meet, and acts of hospitality as well as disagreement can occur.

The exhibition Social Acoustics focuses on the experiences and potentialities embedded in sound’s relational and sociological qualities. In particular, the participating artists María Andueza (Madrid) and Barbara Lázara (Mexico City) bring into focus the conditions and experiences of work and speech, through the matters of stress and saliva, delving into processes by which ideas and desires emerge into the social field. Through audio, video and text works, the exhibition amplifies and retunes often overlooked details of embodied life. 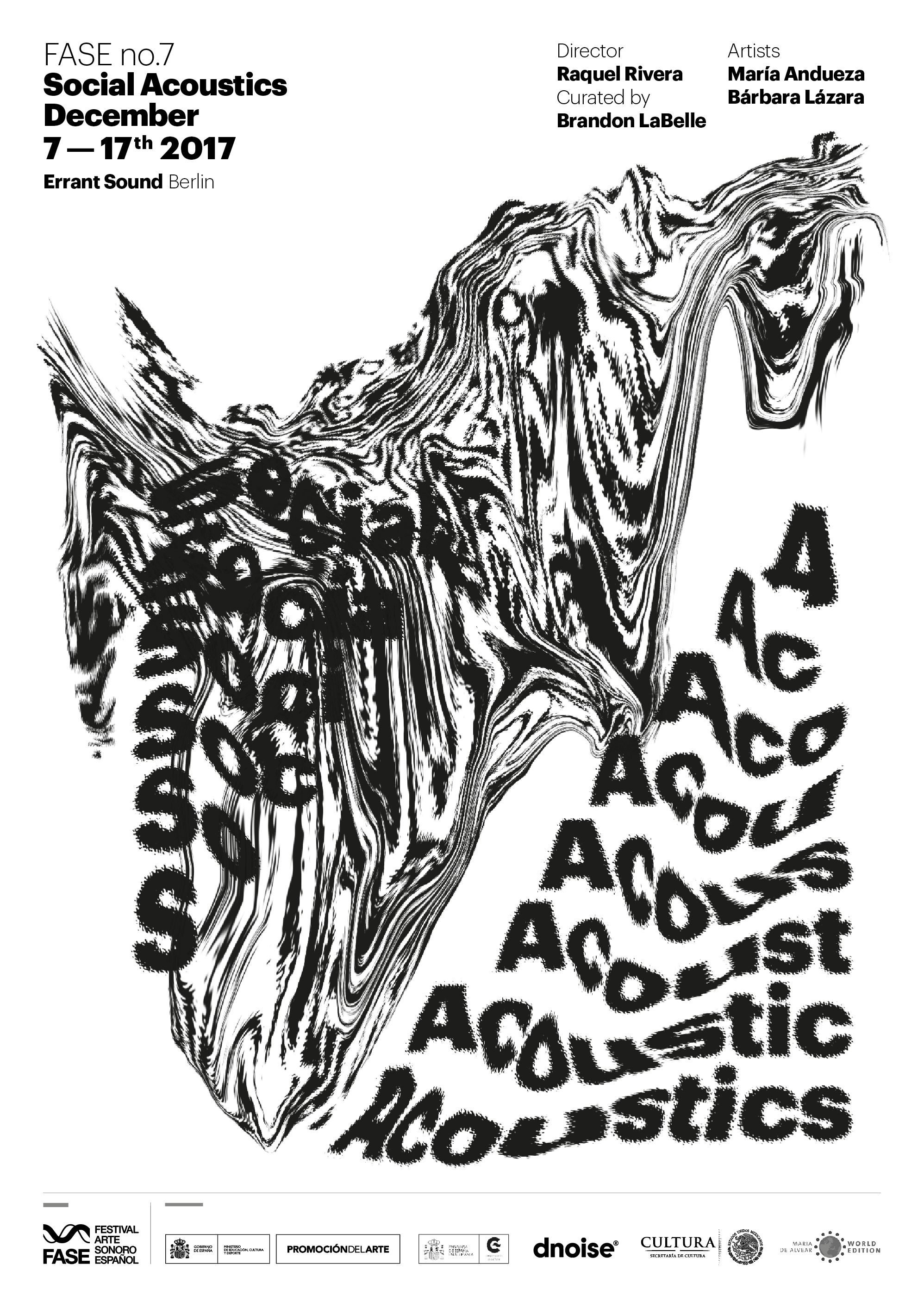 –
María Andueza is an artist and researcher from Madrid. Her artistic and research work deals with Public Sound Art. She works at the radio podcast of the Reina Sofía Museum and as lecturer at the International University of La Rioja (Spain). Currently, she is the initiator of the public art project “Augmented Spatiality”, which has been presented in Stockholm (2013), Valparaíso (Tsonami festival, 2015), Málaga (La Ciudad Demudada, 2016) and Madrid (Arrecife, 2017).

Barbara Lázara is a performer / vocal artist based in Mexico. Lázara focuses on the relation between body, voice and space using tools like choreography and natural corporeal resonances. Since 2009 Lázara creates performative pieces to activate the dichotomy between divine/animal she finds naturally expressed in the human voice. She has given solo performances and workshops in México and often performs in Europe in collaboration with stage and sound artists, such as Zbigniew Szumski, Simon Fujiwara, Naomi Rincon Gallardo amongst others. Her works have been released by Staaltape (GER), Volta (MEX), and Antenas Intervenciones (ECUADOR).

FASE (acronym of Festival of Spanish Sound Art) is an international artistic research platform. In its origins it was developed as an annual Spanish-German festival dedicated to sound art and developed annually in Berlin since 2011. In 2012 FASE collaborates in the II Conference of Hispano-German Music organized by the Goethe Institute of Madrid. FASE has been sponsored since 2014 by the Subdirectorate for the Promotion of Fine Arts (Ministry of Education, Culture and Sports of the Government of Spain), an entity that carries out in Madrid two important milestones of FASE 6 in Tabacalera-Promotion del Arte: emerging environments. Tabacalera (December 2015-Janueary 2016) and Aurality and environment (November 2017-February 2018). The starting point of the festival is a Spanish-German transnational cooperation to promote artistic research and sound art. The main objective of FASE is the creative exchange between Spanish and German artists, and of these with their international colleagues, with the aim of establishing a stable framework for reflection and aesthetic debate. In each edition, FASE takes various themes as the central axis of the selected and presented works.
_
Curated by Brandon LaBelle for FASE: Festival of Spanish Sound Art