LITERAL:
Share is a weekly assemblage of portable computing, founded in 2001 by Barry Manalog, geoffGDAM and Newclueless that is providing an open forum, in real life, for data exchange and media performance.

Patrons are encouraged to show and exchange ideas freely, giving each other feedback, catalyzing development of techniques and philosophies in new media.

Share begins every Sunday at 5pm with the open jam. An open-mixer system for video and audio lets participants patch their equipment into the multi-channel, multi-room sound system and multi-screen video system. Artists are encouraged to bring any portable audio and video gear and take a turn sharing, join in an open jam, or form impromptu collaborations. We accommodate both solo performers and those looking to jam, as time and space allow. Arrive early for best results.

Many weeks there is a featured performance at 8pm. A local or visiting artist takes over the audio system to do their thing.

Ecume des Jours of NYC Wireless, set up an 802.11 (aka WiFi) wireless hub at Openair in the Summer of 2002 when he became a regular at Share. In addition to enabling file servers and a number of peer2peer A/V apps to be easily utilized by multiple users, the wireless connection has, coupled with the OpenAir broadband connection, given Share the ability to have an interactive online presence, capable of collaboration with global partners. The weekly event is streamed through servers in the Netherlands courtesy of the Waag Society for Old and New Media and an open and growing archive of individual work and past jams fills the void between live sessions.

Share is the place to: sing a new pop song you’ve written, preview that video project you’re working on, learn about new software developments, join an open jam of digital artists, form an impromptu collaboration, hear how your new songs sound on a big system, meet coconspirators for art projects, spin some mp3s, look for new Max patches and Buzz machines, or relax and have a sunday drink with interesting people. 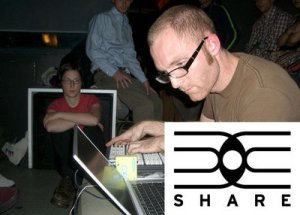