Natural Imbalance: The Threat to Female Field-Recorders By Lucy Jones

Until late this summer, I took daily research walks across a London marshland to inspire a project relating to the area. That was, until I heard about reports of attacks on women near the river. Police thought three different men were responsible; a park ranger told me that one man was cycling up to young, blonde, female joggers in broad daylight, hitting them on the back of the head, and then attempting to assault them. I stopped going, resentful of the fact that my gender made this work unsafe, while my male peers could carry on, unthreatened.

As I sat cooped up at home, I wondered whether this threat to women’s personal safety underpinned the male domination of nature writing and music-making rooted in field recordings. Both depend on being outdoors, alone. Was the comparatively low number of female musicians using nature as a compositional tool a result of feeling vulnerable in certain environments? Were female music-makers taking safety precautions in order to work that their male counterparts weren’t even aware of?

Norway-born artist Jana Winderen specializes in recording sounds from beneath the earth’s surface: under the sea, within the crevices of icebergs. My favorite piece, “The Noisiest Guys on the Planet”, is an underwater recording of a mysterious type of shrimp. The decapods snap, crackle, and pop, making a strange, insectival music. Last year’s Out of Range features the ultrasound and echolocation of bats and dolphins. It’s eerie, orchestral, and calming. As well as the unseen world, her art is inspired by Joy Division, Einstürzende Neubauten, and Laurie Anderson.

I put my theory to Winderen. She says that she hasn’t felt held back by safety concerns in her work, but that her environments are possibly safer because they’re rural and natural instead of urban: say, the middle of nowhere in Greenland or Iceland. “It can be scarier to be in a city you don’t know, or a place where you don’t know the social code or what’s happening,” she says, speaking from a study in Norway, surrounded by textbooks and recording equipment. “If I’m in a city environment, I ask local people, ‘How is this area? Is this safe?’” She recalls a trip to the Dominican Republic where the local people dissuaded her from going out alone at 3 a.m.

She’s aware there are fewer women in her field but believes the imbalance is changing. “Equipment is much lighter and it’s easier to take your stuff around, although I still carry 40kg around with me all the time,” she adds.

German-born, Kent-based Claudia Molitor is a sound artist and lecturer who also sticks to well-trodden locations to find sounds for her music. “I don’t go to places in town that I don’t know at all,” she says. “I make my choices. I’ve always wanted to do things like just set out with a tent and walk across Britain on my own, but I don’t think I would ever do that because I’d think it’s a bit dangerous to take a tent and just pitch up somewhere.”

We talk while she is in the Alps recording found sounds for a new project inspired by Harry Partch. “The best thing in the Alps are the cow bells!” she says. “It’s just amazing because each bell is ever so slightly different and because they’re all attached to cows that are eating grass, the rhythms are constantly changing.” She notes that a sense of historic physical inhibition can be seen in other art forms. “I find in a lot of women’s art—not all women’s art—this attention to tiny little details. Maybe that’s because women’s worlds used to be much smaller than men’s worlds. If you look at the art of a lot of women hundreds of years ago it focuses on the domestic because that’s the only area they could control.”

Molitor has observed, when teaching music students, that “as soon as technology comes in, hardly any women take it up—it’s really still dominated by men.” The fault lies in the way that science and technology are taught, she believes, and tells a story about an incident at her daughter’s school. A teacher set the class to work on an experiment with an extra instruction: if the girls were really struggling with the work, the boys could help out. “My daughter was utterly incensed and rightly so. [The girls] complained about it.”

Brussels-based composer Christina Vantzou’s work makes sparing use of sound recording. She affirmed that the way traditionally male-dominated subjects are taught can have a crucial lasting influence. Speaking from a cafe in Greece, she told me she was inspired by a cool female teacher in her university’s video department, and a few other role models: “I think that’s the key: ‘Oh, that person’s doing it, it’s no big deal.’” Photographs of the French electronic composer Éliane Radigue and Björk’s outspoken interviews had a similar influence.

Since moving to Brussels, Vantzou has felt a lot safer than she did in Baltimore, where she lived for six years, but says she still encounters risks that men don’t have to consider. Part of that, she says, is just being a woman: the feeling of walking around at certain times of day and in certain places on high alert, avoiding eye contact, hand close to phone or keys. Improvements in tech, she says, are making it easier for women to go out and find sounds in a practical sense.
“A lot of my girlfriends are getting Zoom recorders and that’s been really exciting to see. A lot of people feel it’s an easy thing to get and use.”

Ingrid Plum, a conceptual sound artist based in Brighton, thinks the technology issue is structural and systematic. “Men are given permission to learn about it and women are expected to come in at an expert level,” she says. “That skill-sharing of learning isn’t supported with women, neither by the opposite sex or by women themselves. We don’t share skills—we’re almost educated to compete.” Plum mentions Ian Stonehouse, the head of Electronic Music Studios at London’s Goldsmiths University, who noticed that when he has women working in his studio, the number of female students taking the classes increases. “He’ll always have female members of staff in order to increase the uptake of technology by female students,” she says.

Plum’s own precautions when making field recordings include disguising her equipment and avoiding carrying branded bags. She also keeps her earphones in at all times and cultivates support in fellow female communities. Even though she’s trained in martial arts for 13 years, Plum still feels restricted by social dangers and crime. In Brighton, she had planned to record her voice and the sea under a pier, but a rape in the area meant that she didn’t feel safe to return there at night. “I’d have to enlist someone to come with me and that immediately delays the happenstance and spontaneity you need for field recordings. As soon as you have a team, it’s a lot more difficult.” It joined another list of projects on the back-burner because of circumstance.

Of course, it’s not only women who are victims of assault. Rob St. John, a musician, writer, and cultural geography researcher spent a lot of time pottering around the River Lea—close to the attacks on my local patch—for his recent album, Surface Tension. “I have felt vulnerable but I also have developed strategies for places and spaces I might feel wary and vulnerable in,” he says. Binaural mics, for example, are microphones that sit in your ears so you look less conspicuous out in the middle of nowhere. St. John also avoided recording at night.

But place, power, and who gets to think about the landscape is something he’s very aware of. “I’ve absolutely noticed this gender disbalance in terms of who’s making work, who’s getting published, who’s getting released, not only in sound art,” he says, citing an interview with Cathy Lane from 2012 in which she said only 10% of students at London College of Communication were female.

During my conversations with these artists, I discovered that my notion wasn’t the whole story —the truth is never as simple or binary as it first seems, after all. Yes, there is still a gender imbalance in this genre of music-making, but the reasons are manifold. Language, communication, and visibility are crucial agents of change. People will commit crimes—that’s never going to stop—but if support networks such as Ekho, a celebratory website of women working within sound art, and educators, who make efforts to address visibility, continue to exist, the world of women will increase in size, scope and place—as will their art. 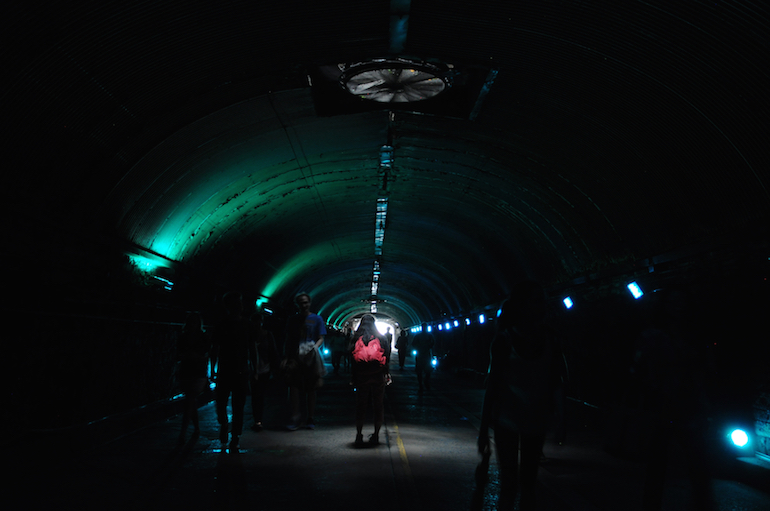