The Magnetophone, by Slovenian artist Hrvoje Hiršl, consists of a rectangular metal frame housing 12 magnetic play/record heads and a system of wheels which drives a magnetic tape around a closed circuit. The tape heads randomly play or record onto the tape at different points along its length, so that previous recordings are played or erased by new (re)recordings. This results in a fragmented multi-layered portrait of a dynamic acoustic space and of a sonically “self-aware” machine. Since the recording can begin at any point on the tape spatio-temporally, a multi-entry point feedback loop creates and records the machine-monologue. Assuming the starting point is a blank tape, the recordings increase in complexity and gradually degrade the acoustic memory of the process. The Magnetophone, as it recombines and re-amplifies its own sonic resonances within space, is in many ways similar to Alvin Lucier’s well-known work “I am Sitting in a Room”. Lucier’s work, by re-recording a passage of text, documents the gradual disintegration of spoken word into pure tone. As with Lucier’s work, The Magnetophone records both the sound of its own ‘voice’ and the resonance or formant frequencies of the room in which it is placed. Over time the characteristic sounds are recombined and re-recorded so that they become ever more distanced from the original through the interaction of spatial resonant harmonies. The multiple recording and playback creates a hyper-spatial feedback recording process so that after many play/record iterations only a sonic abstraction of deep, distorted, saturated echoes remain as a sonic signature of the space itself. Paul Prudence 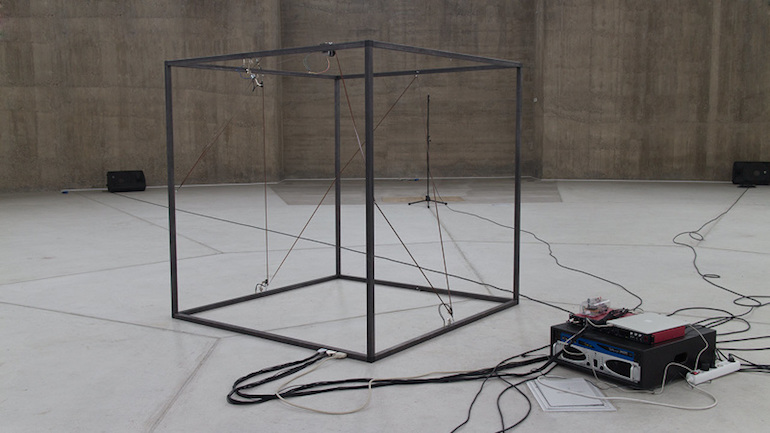 The construction of the work resembles the paper tape transport on the first computer Colossus that the British code breakers used to read encrypted German messages during World War II.

The cube is constructed out of thin steel tubes as a sturdy support for the magnetic tape loop. The magnetic tape is looped around the wheels that are fixed to the cube construction with elastic bands to keep the angle and the tension of the tape. A stepper motor is moving the tape around the wheels with constant speed. A system of play/record magnetic heads is connected to the cube construction. All of the connecting wires are hidden inside of the steel tubes of the cube. The sound of the surrounding space and the visitors is broadcast and recorded randomly on different parts of the looped tape making a constant feedback/delay loop that is gradually developing more and more.

As opposed to classical feedback loop this one is hyper-spacial, since it has multiple recording points that trigger randomly on random parts of the tape. The spatial recording of the space and the interactions with the space and the constant rewriting of the loop serve like a spatial amplifier, accenting the characteristics of the particular space of the performance and removing the articulated sounds, abstracting it until the only thing left is the sound of the space and how it resonates.