LITERAL:
Language has always played a central role in Bruce Nauman’s work, providing him with a means of examining how human beings exist in the world, how they communicate or fail to communicate. For Raw Materials, he has selected 22 spoken texts taken from existing works to create an aural collage in the Turbine Hall. Removed from their original context, the individual texts and voices become almost abstract elements, taking on new meanings as they are rearranged as part of a single work.
Raw Materials also draws on Nauman’s fascination with space, and the ways it can alter our behaviour and self-awareness. The Turbine Hall has /been organised so that visitors encounter ‘bands of sound’ that run in strips across its width. No other physical changes have been made to the space. Sound becomes a sculptural material in itself, one that orchestrates and measures its surroundings.
The Turbine Hall is filled with voices, some clearly audible, others indistinct, which merge with new, ‘found’ sound from the voices of visitors. In Raw Materials, Nauman has transformed this cavernous space into a metaphor for the world, echoing to the endless sound of jokes, poems, pleas, greetings, statements and propositions. 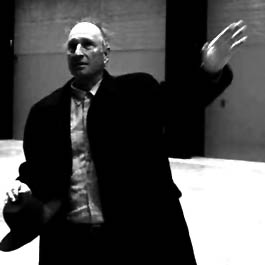