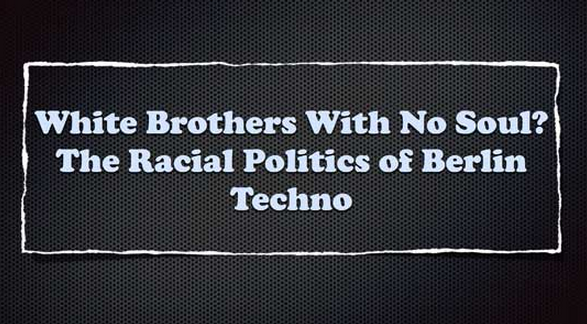 The reunification is typically imagined in mainstream histories as a seamless blending together of East and West, which leaves out the virulent racism and violence during this period, especially against non-white bodies. Although called xenophobia rather than racism, it didn’t matter whether they were German or not so long as they were not white. Thus, it seems very limited to imagine the history of Berlin Techno only as this coming together of what I refer to in my talks as “the white brothers with no soul”, particularly since the Pogroms are still largely omitted from the German and international collective memory of the reunification period.

The other thing for me, at a basic experiential level that really made me take notice, was that these histories are not only recounting the emergence of Berlin Techno per se, but are also constructing a very particular story about musical cultures in West Berlin during the 1980s before the advent of Techno. What generally gets left out are the not very elaborate but nevertheless very present Black music cultures in GI discos and other clubs that played Black music in West Berlin before the fall of the wall. In these narratives, there is definitely a move to disassociate Berlin Techno from Black musical influences. I’m not simply saying “this is the appropriation of Black music” but instead asking “what different histories of Berlin Techno and of Germany would we get if we actually opened this up a little bit and looked at other dance music cultures and other forms of clubbing.” For me, it isn’t an either-or question, but a matter of highlighting that there existed other forms of clubbing and musical cultures, which are once again being written out of history. This ensures that Berlin Techno, Germany and German-ness are continually being imagined as white.