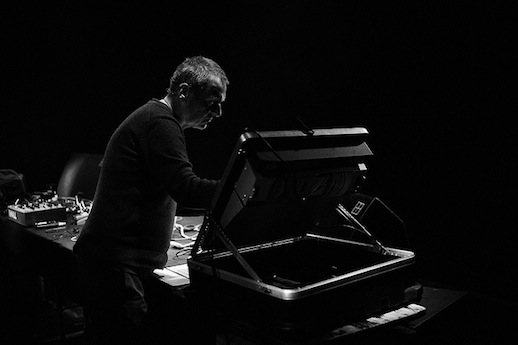 Sounding Floor (An Interview with Zbigniew Karkowski by Marc Weidenbaum)
Published on October 29, 2000

As rootless as he is active, Zbigniew Karkowski is a portrait of the modern sound artist. His work is complex, especially for listeners who prefer to have their avant-garde hung on the skeleton of a proper song. Much of his extensive recorded catalog — five dozen albums to date, by some estimates — is built from field recordings. Take, for example, Mutation, his recent collaboration with Akifumi Nakajima, also known as Aube, which involved the taping of sounds from a temple in Kyoto, material which was processed at a later date into something one suspects the locale’s elders would be hard put to recognize. It’s a haunting, ethereal field of textures and noises, static and grace.

Karkowski was born in Cracow, Poland, on March 17, 1958. Since then he has lived in Gothenburg, Sweden; Amsterdam, Holland; Berlin, Germany; Paris, France; and, since 1994, Tokyo, Japan. He can seem surprised, himself, by his geographic resume: “Somehow I moved around a bit.”

At best, these various locales serve as a kind of base of operations. “I’m spending maybe at the most five or six months a year here,” he says of Tokyo. “I have to travel a lot due to my work, so my life has became very nomadic lately.” He studied classical music when he was a kid in Poland and then studied composition for five years in music conservatories in Sweden (Gothenburg) and in Holland (Den Haag).

In the preparation of this interview, Karkowski corresponded with Disquiet.com on and off over the course of the month of October 2000. When asked what he was up to presently, he provided an extensive near-term itinerary and the associated web links:

“I’m leaving Tokyo for a month to Europe again on Nov 1. I have two performances at the Observatori festival in Valencia, Spain. Then I’m doing a rather huge audio/laser installation during Audio Arts Festival in Cracow, Poland, then having new orchestra piece performed (have to rehearse it first with them) by Orchestra Municipal de Barcelona during LEM festival there — see, then I’m performing with Sensorband at the 38rugissants festival in Grenoble and then doing solo concerts in Nantes and Paris. So for the whole month I’ll be on the road again. And on coming Monday I have concert with Sensorband (and solo) in Tokyo. Many things happening lately (I’m also having something like 10 releases that will be out before the end of this year, hopefully — all the masters are already in the hands of the labels) but I don’t know though whether it is necessary to mention it all in this interview. I’m not so very interested in making promotion for myself.”

Despite this reticence, Karkowski openly discussed his record techniques and the nature of his collaborative work, still something of an anomaly in a field populated largely by solo artists. He remarked on the importance of packaging to his recorded projects, which often appear in unique formats, like collections of tiny CDs with individualized artwork, and on the unique tensions of live performance. And he talked about the unique sources of his sounds, from the floor of a Japanese temple to a wildly processed clarinet.