As a friend told me once, the new is like arriving at a solitary cove when you are escaping the crowded beaches full of umbrellas. That moment of happiness that is felt when you finally find the information you were looking for during days in a library. The thing is that as we stop being kids it becomes more difficult to get that feeling. Discovering the new implies a full time effort that some people call it developing taste, others distinction and others elitism. That library´s insignificant epic of us, finding the treasure´s beach, is something that must be kept as a secret, as the important discoveries in fantasy novels.

That is what I think No patent pending,Self made performative media tries, edited by Matteo Marangoni, regular columnist of Neural magazine, also contributor of this project. This publication from November 2014 consists of eighty four cards inside a pack that agglutinate eleven short essays about different aspects of contemporary art and the so called new media, terminology that this time has been altogether fairly used. In conjunction with the articles, we find a card with the credits and instructions for reordering the content following permutations, whose performance documented in this video was presented at TETEM Kunstruimte, Enschede (Netherlands) on November 11, 2014.

The first thing I had to do when I received this flawless publication was to arrange the articles in a traditional order of reading. For that I had to guide myself by the different fonts, formats, numbering and justifications of the design of the contents by Luc Derycke and Stijn Verdonk. Once ordered on my home´s floor, I could start the reading to confirm that the pack fulfilled the essential norm, almost as an artists´ book, where form and content and inseparable.

This search and defence of the new takes place in No patent pending in different contexts. To leave something for the reader´s surprise, I will talk only about the articles that either I found specially interesting, or helped me to conform, without being too unfair, the argument that this publication seeks and vindicates the new.

There are the lower senses new paradigm described by Yolanda Uriz; the “new totality” in musical composition by Lars Kinde; the “Smart new world” by Kenneth Goldsmith in Alessandro Ludovico´s text, and digital fabrication historic and socially analysed by Ewen Chardronnet. All that refers to an artistic and intellectual tendency that strongly preserves the modern idea of vanguard as an art able to transform the world, our way of understanding it and constructing our environment. Is this possible?

Is legitimate to ask ourselves where do these works and ideas develop, in which context, which environment do they aim to change. A postcolonial analysis, or a critic that opposes to the emancipatory capabilities of technology could argue that the environment/context that these essays talk about keeps being euro-centric, pending and continuing the ideas of the classical vanguardists. We do not find here that naivety, in view of the fact that to define the media thought in this volume, the adjective new does not come so much from the innovative in a modern consumerist/productivist sense, but from the ability to establish new ways of thinking that arise from that technology.

Is well known that technology is not just accessory, but it has been always new. The piano is as technological as the computer, as we can read in Lars Kinde´s text, the important thing is the possible worlds that a critical use of both can show us. In that sense the example analysed by Alessandro Ludovico is revelatory, since it revolves around the strategies of people such as Kenneth Goldsmith, Peter Sunde or Aaron Schwartz, that, perverting the commercial use of the internet, they reach new ways of distributing information that go beyond the traditional consumerist models, demonstrating that the internet is not just corporations from the US. 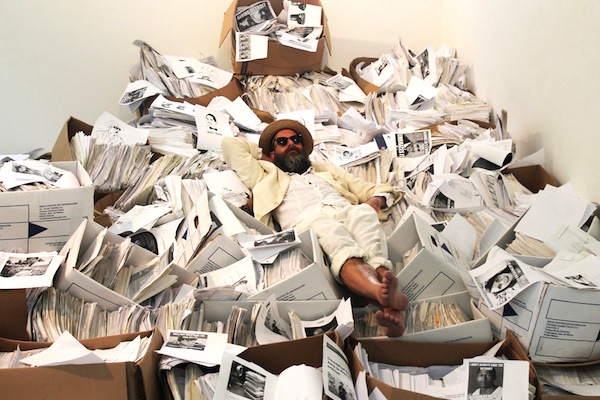 Also in that sense “Approaching the deep sleep of the lower senses…” by Yolanda Uriz is concerned with a new aesthetic and phenomenological paradigm that is not the immediate from the embodied nor the “disembodied” imposed by the capitalist regime (internet, cinema…), but a third one, artistic and culturally produced, a paradigm with which we define “a new body in a new world” by emplacement, that is, by the interrelation between body, mind and environment.

And of course the text about digital fabrication by Ewen Chardonnet, where far from applauding 3D printing as the integral revolution that they tried to sell us, it talks about the problems that the M.I.T. FabLabs engendered, comparing those facts with the theories by John Ruskin and the Arts & Crafts of the end of the nineteenth century in the UK, all that to demonstrate that the novelty of the tool will not bring, ever, worker´s emancipation.

I leave out dissecting the work by Evelina Domnitch and Dmitry Gelfand, that only brings the will of listening to it, the journey through Anne Wellmer´s archives looking for Dick Raaijmakers and many more issues. This search for the new, we were saying, has to do with fantasy, with the still unexplored worlds of the imaginary, the ones from Munchausen or Don Quixote that Matteo Marangoni refers to in his introduction. I stop here, then, so that there is something left for the conclusions of each reader, so that each one finds his or her own coves in this pack of cards.