Reading this book is like a stimulating listening experience: I found myself measuring the effects of sounds heard, overheard, or imagined.

– R. Murray Schafer, composer and author of The Tuning of the World

Never before has the everyday soundtrack of urban space been so cacophonous. Since the 1970s, sound researchers have attempted to classify noise, music, and everyday sounds using concepts such as Pierre Shafer’s sound object and R. Murray Schafer’s soundscape. Recently, the most significant team of soundscape researchers in the world has been concerned with the effects of sounds on listeners.

The ability to concentrate our attention on the speech of a specific speaker by disregarding parasite information coming from the surroundings…From the physical perspective, one of the predominant elements is the spatial separation of noise and speech. On the psychophysiological level, selective listening is governed by our capacity to discriminate sounds from different sources – by our capacity to localize in the noise. 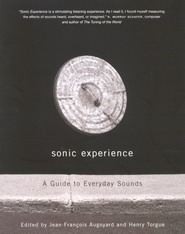