The flagship plug-in, named UpMix, provides functionality that can speed the repurposing of stereo or mono audio content into a surround environment. By providing a number of algorithms and advanced positioning control, UpMix offers an easy way to expand an entire mix or individual elements of a mix into immersive surround tracks.

ReRoute acts as a universal format router allowing the conversion of any 6 channel format to another.

These tools provide an unprecedented level of control. When used as part of an engineer’s toolkit, they can aid in the creation of a deep, immersive mix. UpMix promises to be an innovative tool that increases productivity and ease in professional surround productions. UpMix is available for users of Pro Tools TDM (Macintosh OS X or Windows), Steinberg Nuendo and Cubase SX 3 (Macintosh OS X or Windows) and MOTU Digital Performer. 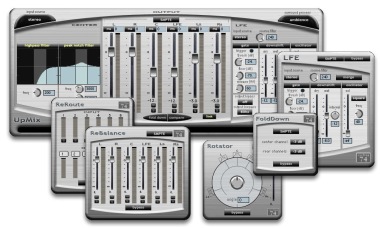