The mechanism turns the dial of the radio either to the left or right. The microphone then captures a three-second sample of the audio signal. This signal is compared to a signal saved in the microprocessor’s memory of the word “god.” If the new signal is not equal to the signal in memory, the mechanism turns the dial again and the process is repeated. If the signal captured is equal to the signal in memory, the piece deduces that it has found the word “god”. It then triggers an electronic bell and marks one unit on an electronic odometer. In this way, “Looking for God” tries to metaphorically replicate humanity’s own pursuit of understanding the world.

At the Salone del Mobile in Milan this year, Dave Chiu and Alexandra Deschamps-Sonsino presented two other unconventional radios.

Commitment Radio rethinks the idea of preset stations. Moving a metal marker along the tuning strip allows you to scan for stations.

Once a station has been found, the dial must be inserted into the radio to keep in contact with this station. Each selection leaves an indelible mark and as stations are added, a visual history of a person’s radio-listening habits will develop. This also personalises the object and makes it unique for each person: the visual created by the choice of channels will vary as well along with the user’s listening habits. The radio has a finite amount of space so Commitment Radio encourages deliberateness in your choices and actions.

The Stay Tuned Radio requires you to become its antenna. The device can only produce low-level static until you touch it. As long as you remain in contact with the radio, a randomly selected station will play. When you breaks contact with the radio, the signal reverts to static. Without you, radio signals are no different from static. The act of listening to the radio changes from passive to active. So to listen to that channel you have to keep touching it. Today, we listen to radio in the kitchen or in the car, as a background activity, but radio used to be an event, where families would gather to listen with full attention.

This radio reminded me of Monika Hoinkis‘ research on how intimate moments can be created between a human and an object. One of the prototypes she created for her Living with Things project is a radio that you have to hold by its handle and keep close to your body to make it work. If you leave it alone, the music will stop.

Images by Dave Chiu. Dave’s and Alexandra’s Flickr sets of the radio.

Stay Tuned and the Commitment Radio, along with other IDII students projects, are exhibited from April 11th-21st (noon-5pm), at the Fabbrica del Vapore, Via Procaccini, 4 in Milan. 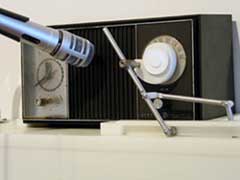