Literal:
Had a pleasant surprise when entering the ‘coeur de ville’ building, opposite the town hall, in Vincennes yesterday afternoon. The walls of the long and high ‘rue intérieure’ had just been lined with a large collection of strange, but also classic and majestic, looking machines. Constructs with some of that typical 19th century ‘weird science and mad inventors’ feel … sound machines … mechanical sound machines … ‘Musical machines’ (machines musicales), it reads on the sober green ‘pamphlet’ that accompanies the show.

There are about twenty of them, designed and created by Claudine Brahem. Some of them, the pamphlet explains, were commissioned for music theatre pieces. Like (see pictures) the curious rolling double bass kettle drum, that stems from a 1994 collaboration with choreographer François Verret and Fred Frith (Nous sommes des vaincus). brahem machine Or the very simple but effective énumération ‘toys’, consisting in a spiral slide, a swing and a wheel, which are among the Brahem machines that figure in music theatre pieces by Georges Aperghis. Another one of these is the rather more ‘complicated’ tricyclist-orchestra (‘Eclipse partielle’).

Other machines were made for the exposition (they have been, as googling learnt me, exposed already at several other places during the last couple of years), and “mettent en oeuvre des mécanismes racontant une histoire sonore” … I suppose that among these ‘special constructs’ are the five, what might be described as, ‘mechanical generators of classical horror B-movie sounds’ … Maybe these are my favorites among the many nice constructions on view … Besides my camera, I had a (monophonic) microcassette dictaphone in my pocket, and though there are some ‘do not touch’ signs, one is allowed to ‘sound’ many of the musical machines. So I did record some of it, and I used this recording to compile for you a short lo-fi Brahem machines monosonorama,
listen
which I join as a podcast to this entry. You may listen to short samples from four of Brahem’s ‘horror machines’, in order: baptème par le feu et l’eau chaude, danse des fantômes, course du petit garçon poursuivi par un essaim d’abeilles and the machine à intempéries.

The last minute or so of the recording will give you a (but shallow!) impression of what happened when at some point a couple of kids, arriving in the hall after their music lessons (the Vincennes music school is in the same building), discovered the machines, and had a go at them in the cathedral-like reverberating space … Ah, now that was having fun … you should have seen and heard that for real … The Brahem machines are solid, and very well constructed, but I doubt they (anything) can survive many such ‘attacks’, were they to continue … :-) … 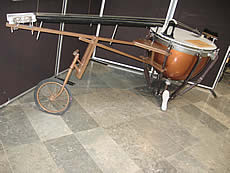