Ross Bencina released AudioMulch 1.0 – software for electronic music performance, production and education. Of value to electronic music composers and musicians alike, AudioMulch brings together capabilities ranging from studio staple effects to extreme processing algorithms within a user interface that favours the dynamic flow of intuitive creation and improvised performance. The release marks the end of an extended public beta-testing period spanning almost nine years, which has resulted in robust software ready for the stage, studio and classroom. The software can be downloaded as a trial version from the internet at www.audiomulch.com. The full version is competitively priced at only $89 (USD). AudioMulch works on PCs running Microsoft’s Windows family of operating systems.

AudioMulch has played an influential role in the electronic music performance and production scene in recent years. The official AudioMulch discography lists over one  hundred and thirty recordings that make use of AudioMulch’s unique sonic qualities. Among the listed artists are electronica luminaries such as Fourtet and the Nine Inch Nails. Leonard Paul, soundtrack composer for The Corporation, Canada’s highest grossing documentary in history writes: “I simply wanted to say ‘thanks’ for such a great program and that it is truly great for film scoring.” The software is so easy to use it has even found its way into primary school teaching programmes in the U.K. where students have used it to compose “sonic postcards” from recordings of their environment.

Over the course of its development AudioMulch has attracted a diverse and welcoming internet community who have actively contributed to the software’s evolution. This release includes over forty new example files contributed by community members.

AudioMulch Interactive Music Studio is developed by Ross Bencina. Ross is a composer and performer of improvised electroacoustic music and a specialist software developer. He presents his work at academic conferences and symposia both nationally and internationally. He is the sole proprietor of Sonic Fritter Pty Ltd, which sells AudioMulch and offers consulting and software development services for desktop andembedded audio applications. 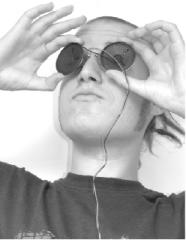