Finger Ring is a system in which a cell phone decides whether to ring by accepting votes from the others in a conversation with the called party. When a call comes in, the phone first determines who is in the user’s conversation (see Conversation Finder project). It then vibrates all participants’ wireless finger rings. Although the alerted people do not know if it is their own cellphones that are about to interrupt, each of them has the possibility to veto the call anonymously by touching his/her finger ring. If no one vetoes, the phone rings. Since no one knows which mobile communication device is about to interrupt, this system of ‘social polling’ fosters collective responsibility for controlling interruption by communication devices. I have found empirical evidence that significantly more vetoes occur during a collaborative group-focused setting than during a less group oriented setting. This system is a component of my PhD work on Autonomous Interactive Intermediaries, a large research project in context-aware computer-mediated call control. 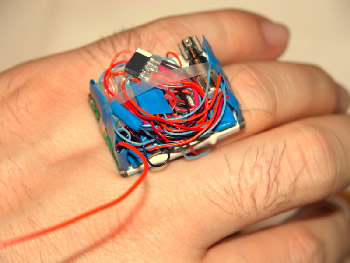