[…] In a number of compositions she has combined her treatment of environmental sounds extensively with the poetry of Canadian writer Norbert Ruebsaat. (Cordillera, A Walk through the City, Cricket Voice). She also has written her own texts for a series of performance pieces for spoken text and tape. In addition to her electroacoustic compositions, she has created pieces for specific “sites”, such as the Harbour Symphony, and École polytechnique. In pieces like The India Sound Journal she explores the deeper implications of transferring environmental sounds from another culture into the North American and European context of contemporary music, electroacoustic composition, and audio art. In 1998 she collaborated with her Indian colleagues Mona Madan, Savinder Anand, and Veena Sharma on a sound installation in New Delhi entitled Nada-an Experience in Sound, sponsored by the New Delhi Goethe Institut (Max Mueller Bhavan) and the Indira Ghandi National Centre for the Arts. And most recently she created together with photographer Florence Debeugny , At the Edge of Wilderness, a sound installation about ghost towns in British Columbia, commissioned by Vancouver’s Western Front Society […]. 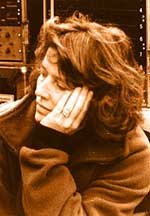