LITERAL:
MOLVANIA DISQUALIFIED FROM EUROVISION!
The tiny Eastern European republic of Molvania was disqualified from the Eurovision Song Contest this year.

Zladko “Zlad” Vladcik was to perform his very popular techno-ballad, “Elektronik – Supersonik” – described as “a melodic fusion combining hot disco rhythms with cold war rhetoric”.
However, the 23-year-old singer was arrested at Istanbul’s Ataturk International Airport and immediately deported. While Eurovision does not normally test for recreational drugs, unfortunately for Vladcik, Turkish Customs do.

On his return, “Zlad” apologised to everyone in Molvania for letting them down, especially his family, his friends and his dealer.
“ZLAD” – A SHORT HISTORY
Zladko “Zlad” Vladcik rose to prominence in 2002 when he won Molvanian Idol in controversial circumstances – the other finalist, Ob Kuklop, pulled out due to a serious throat condition after one of the judges tried to strangle him.

“Zlad” immediately released the megahit, “Juust Az I Amm” – hailed by Rolling Stone as the most incorrectly spelt song of all time.
After barely 2 days on the Molvanian “Rhythm & Polka” charts, the track went platinum – remarkable considering it was only available on cassingle.

Then, in an exciting move, “Zlad” formed supergroup Wow! But while on their very first tour, he decided to go solo again, citing the fact that the rest of the band was “moving in a different direction” (Romania). 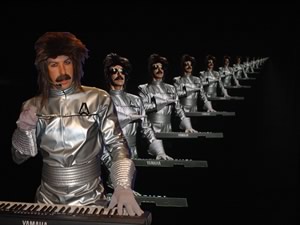