Jin Hi Kim is highly acclaimed as both an innovative komungo (Korean fourth century fretted board zither) virtuoso and for her cross-cultural compositions. Kim has introduced the Korean indigenous komungo for the first time into Western contemporary music scene with her wide array of pioneering compositions for chamber ensemble, orchestra, avant-garde jazz improvisations and multicultural ensembles. She has co-designed the world’s only electric komungo.

Kim has created the live interactive pieces for electric komungo and MIDI computer system. Using MAX/MSP, the komungo sound is processed through a personal computer program in live that is triggered by MIDI foot pedal. Staying true to the nature of the instrument, her solo interweaves from old timeless mind to space-age blips.

Over twenty years Kim has developed a series of compositions, Living Tones –The timbral persona of each tone generated is treated with an abiding respect, as its philosophical mandate from Buddhism, a reverence for the ‘life’ of a tone, the color and nuance granted each articulation from Korean Shamanism. 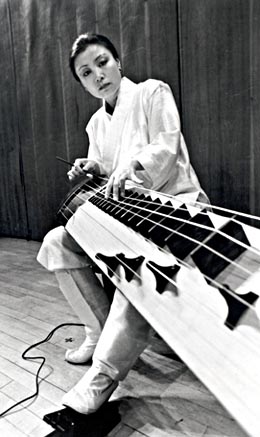