HearWear -­ The Future of Hearing

Hearwear suggests revolutionary new possibilities in hearing products for everyone, not just people who are deaf or hard of hearing, and introduces the possibility of new products to allow everyone to control and enhance the sounds around us. Imagine having a remote control you could use to instantly block out the sound of noisy builders or a screaming child; or a product that allows you to hold a clear conversation in a noisy bar. The display includes stylish and attractive hearing products, some almost like jewellery, that people not only need but will really want to wear.

HearWear -­ The Future of Hearing, a new exhibition at London’s Victoria and Albert Museum, shows off trendy deaf-tech prototypes like gadgets that can filter out annoying noises and memory glasses that replay the last few seconds of conversation — handy for wearers who might have missed someone’s name.

It’s not just the hard-of-hearing who can benefit from applications inspired by traditional hearing aids. Hearing is the next sense ripe for a technological revolution, according to the exhibition’s organizer, Royal National Institute for the Deaf, or RNID.

One of the exhibits, called surround-sound eyewear, uses four microphones built into a pair of glasses to amplify sound depending on which direction the wearer is facing.
“The result is a type of three-dimensional superhuman hearing similar to that found in certain animals such as coyotes,” said designer Sam Hecht of London’s Industrial Facility. The company harnessed a theory known as “superdirectivity beamforming” to build the specs, projected for release in 2007.

Another concept, the Goldfish, named for its short-term memory, is a set of earphones that would repeat the previous 10 seconds of conversation in case the wearer missed a snippet. 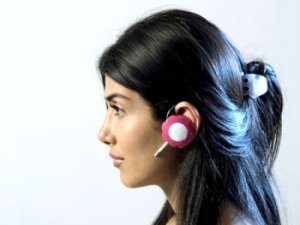