Sound Fountain is an installation which captures and replays sounds in the space in which it is placed.

Sounds are captured using a microphone and introduced into the system as a graphic bubble. The size of the bubble is determined by its length and its volume. Each bubble exists as a unique element, interacting with the other bubbles in the system flowing and over-flowing from one container to the next.

As the bubbles become older they lose their colour, colour which was determined by the time they were captured. When they fall from the last container they are gone forever.

Sound Fountain acts as a sonic record of a space, replaying sounds from the past hours, days and weeks.

The soundtrack formed is created by the activity of the bubbles. It is gently abstract, punctuated by the playback of coherent sounds from more focused interaction.

This piece was developed with Mark Haunstein using MaxMSP and SoftVNS. 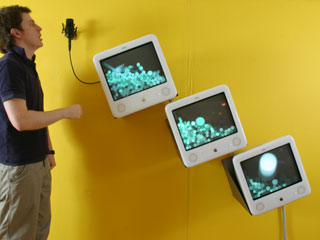