Using live audio feeds from Leeds City Station and the River Aire, US artist Bill Fontana will craft a giant sculpture of sound turning the historic Dark Arches into an immense musical instrument. For two months a loudspeaker system installed within the arches will fill the space with an ever changing combination of live sounds relayed directly from specialist listening devices installed in the surrounding area.

A series of microphones high up in the structure of the station will pick up the bustle of platform activity, whilst sensors fixed directly onto the track buffers will listen to the distant vibrations of incoming trains as they approach, slow down, and come to a stop. Beneath the station, underwater microphones will be plunged deep into the course of the River Aire as the flow of water is redirected through the arches. Sound Lines attempts to capture these continually changing layers of energy as they arrive, depart, and flow through the city.

San Francisco based Bill Fontana is known internationally for his experimental work with sound. Using urban and natural environments as a living source of musical information he radically transforms the meaning of public space. His extensive body of work includes temporary and permanent installations in New York, Paris, Vienna and London. (resoundings.org) 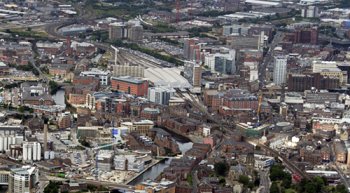