Richie: How do you mean Magda?

Magda: Well, Berthold Brecht said that. Does he mean that if things arent the way they were then they might be something else?

Richie: No Magda, I think he means we should use these laptops and ipods to make minimal sounds.

Ricardo: wow! what a minimal coincidence! I just bought you both a t-shirt with “Because things are the way they are, they will not stay the way they are” written all over it!!!

Richie: well what do you know! son of a gun – how fucking cool is it to be in Berlin? 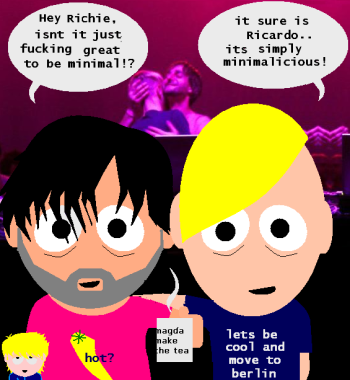