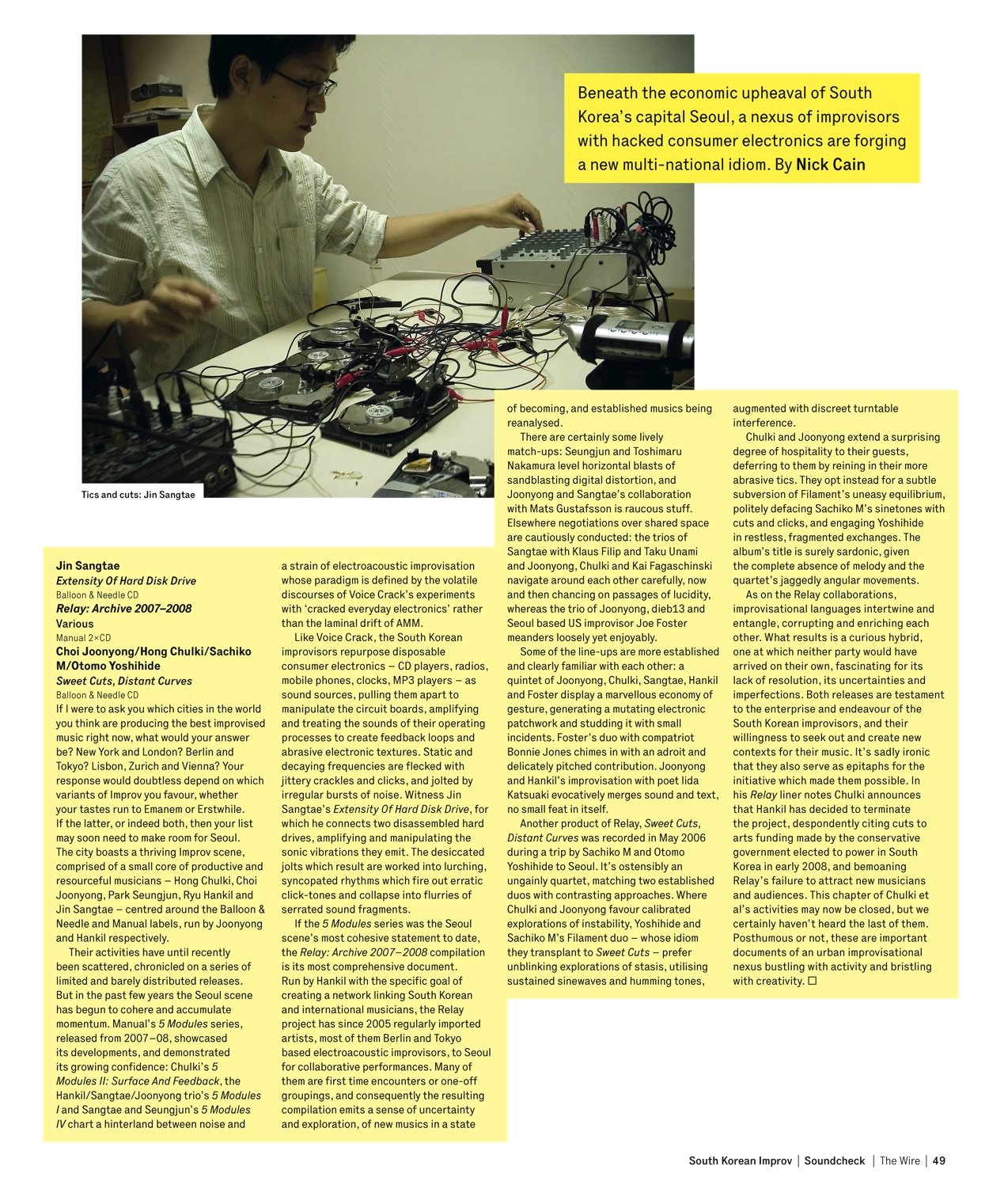 I have been waiting for more than 20 years for those who create music and video just like Lee Hangjun and Hong Chulki. Sound and video are eventually mere data. It is impossible for me to believe in the piece of music or the visual work if it doesn’t start from this harsh reality because the problem lies in its start. Accordingly, Lee Hangjun and Hong Chulki’s work exposes this starting point as it is. They confront and challenge the problem at this point of departure in audio and video.

“From his experience as a part-time worker in Yong-san electronic market, he has developed his way of playing electronic goods such as radio, laptop,computer power, and hard disk drive. On this album, he used two hard disk drives as speakers. When feedback sound goes into the hard disk drives they vibrate and emit sound. Jin Sangtae picked up those sounds in his studio. The result is a mixture of sound from electronic signal and physical sound from hard disk drive ticking, creating a broken groove with the ambience of the studio.” – label

“When I first played improvised music, I used many hard disk drives with radio to pick up and amplify hard disk drives’ internal electric noise. Hard disk drive and radio are one of my main interests, which began from 1994 when I worked at Yong-san electronic market.

My initial way of playing was making linear feedback with disassembled hard disk drive which was converted into speaker. But for this CD I limited the sound by physically connecting two disassembled hard drisk drives and manipulating the vibration that occurs when they emit sound. Although mic captured the sound from the recording space, I also tried to limit the range of that ambience as much as possible. It seems that feedback containts the ambience itself in a certain aspect, but I wanted to narrow down the feedback intwo hard disk drives and play as if the sound was locked inside. Because I was sensitive to the space of the recording studio when I did this recording, I felt I was improvising with the space because the location of the mic and how I play was influenced by the space. And it was different from confronting the silence.”

venue ‘dotolim’ commenced in Feb, 2008. ‘dotolim’ is a small space that have a seating capacity of 20 persons. and dotolim is first space in Korea specialised for electro-acoustic improvisation music and organize ‘Dotolim concert series’ every second month. also it’s use for recording space.