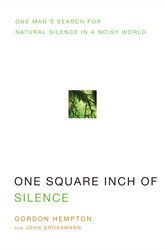 In the visionary tradition of Rachel Carson’s Silent Spring, One Square Inch of Silence alerts us to beauty that we take for granted and sounds an urgent environmental alarm. Natural silence is our nation’s fastest-disappearing resource, warns Emmy-winning acoustic ecologist Gordon Hempton, who has made it his mission to record and preserve it in all its variety — before these soul-soothing terrestrial soundscapes vanish completely in the ever-rising din of man-made noise. Recalling the great works on nature written by John Muir, John McPhee, and Peter Matthiessen, this beautifully written narrative, co-authored with John Grossmann, is also a quintessentially American story — a road trip across the continent from west to east in a 1964 VW bus. But no one has crossed America like this. Armed with his recording equipment and a decibel-measuring sound-level meter, Hempton bends an inquisitive and loving ear to the varied natural voices of the American landscape — bugling elk, trilling thrushes, and drumming, endangered prairie chickens. He is an equally patient and perceptive listener when talking with people he meets on his journey about the importance of quiet in their lives. By the time he reaches his destination, Washington, D.C., where he meets with federal officials to press his case for natural silence preservation, Hempton has produced a historic and unforgettable sonic EKG of America.

Imbued with the boundless curiosity of original explorers like Lewis & Clark, the incisiveness of Jack Kerouac’s observations on the road, and the stirring wisdom of Robert Pirsig repairing an aging vehicle and his life, One Square Inch of Silence provides a moving call to action. More than simply a book, One Square Inch of Silence is an actual place, located in one of America’s last vestigial naturally quiet places in Olympic National Park in Washington State. Hempton shares some of his favorite recordings of the park’s endangered pristine soundscapes on the enclosed CD. This CD also includes wide-ranging recordings and stunning photographs from his pioneering journey, an inspiring quest for quiet that now adds natural silence to the nation’s ecological agenda.

More about Gordon Hempton
Read an excerpt
Order the book