LITERAL:
after 9 online releases, ADIM is proud to release its first cd ever !

“For many years, Melodium’s music – a contraction of melody and medium – was an extremely harmonious electronica where fine melodies coupled with D.I.Y. rhythms. Published by Active Suspension, Disaster By choice (DBC) or Peter I’m Flying, these delicate unions – praised upon by critics – reached an emotional climax with the album A Slight Difference In The Air Pressure (DBC, 2003) where a crystal clear folk guitar appeared here and there.

In 2004, the American label Audio Dregs published Anaemia, a fourth album which was produced a year earlier. This darker and more intimate piece – mastered by Greg Davis (Carpark, Kranky) – put forward the talent of this confirmed pianist.

The roads of Autres Directions In Music and Melodium came across each other in the summer of 2003 and materialized with the first Parthenay EP (Moulin001, mp3) in November, 2003. The work on ‘La Tête Qui Flotte’ (“the head that floats”) began almost immediately. It resulted, a year and a half later, in this incredibly human record, showing a dramatic rupture in Melodium’s music which really opened itself to others. Through its own experience, enhanced by the friendly exchanges with other Autres Directions In Music musicians (Atone, Depth Affect, Dudley, Propergol Y Colargol, Harpages…), Melodium gave way to its highest pop sensitivity.

Armed with a portable mini-disc recorder, he worked outside, in the open air, playing and recording acoustic and classical guitars in the woods or rhythms in the country – sometimes just made of fingers snapping on walls – but also keyboards, melodicas, flutes, jembes, xylophones, balafons, Jew’s harps…, all played by himself and assembled meticulously at home on his computer.

Another novelty is that on ‘La Tête Qui Flotte’ there are voices : first of all, that of Melodium (‘Hellomusic’, ‘Kill Me With A Smile’, ‘La Fin De Tout’) but also that of his friend Dudley (Autres Directions In Music – Moulin002 / on the happy ‘Les Psychotropes Sont Mes Amis, Puis Mes Ennemis’ and on the melancholy ‘Le Creux Est Ma Matière Première’), of his young niece Laïs-Salomé Massoussi (‘La Chanson De Laïs-Salomé’) or of his girlfriend Violaine Barbault – a transient apparition which enlightens ‘La Fin De Tout’. The whole work benefited from Atone’s remarkable work on mastering (Autres Directions In Music, Neo Ouija, Skam).

‘La Tête Qui Flotte’ is a year and a half in Melodium’s life (and at the same time in the life of his label) : ups and downs, disillusions, renewed optimism.
A magnificent collection of acoustic and electronic pop songs which we are very proud to publish today.” 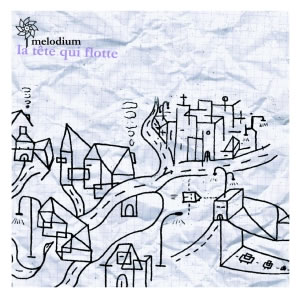