Today, on November 24, 2008, we launch the 1.0 version of the Processing software. Processing is a programming language, development environment, and online community that since 2001 has promoted software literacy within the visual arts. Initially created to serve as a software sketchbook and to teach fundamentals of computer programming within a visual context, Processing quickly developed into a tool for creating finished professional work as well.

Processing is a free, open source alternative to proprietary software tools with expensive licenses, making it accessible to schools and individual students. Its open source status encourages the community participation and collaboration that is vital to Processing’s growth. Contributors share programs, contribute code, answer questions in the discussion forum, and build libraries to extend the possibilities of the software. The Processing community has written over seventy libraries to facilitate computer vision, data visualization, music, networking, and electronics.

Students at hundreds of schools around the world use Processing for classes ranging from middle school math education to undergraduate programming courses to graduate fine arts studios.

The Processing software runs on the Mac, Windows, and GNU/Linux platforms. With the click of a button, it exports applets for the Web or standalone applications for Mac, Windows, and GNU/Linux. Graphics from Processing programs may also be exported as PDF, DXF, or TIFF files and many other file formats. Future Processing releases will focus on faster 3D graphics, better video playback and capture, and enhancing the development environment. Some experimental versions of Processing have been adapted to other languages such as JavaScript, ActionScript, Ruby, Python, and Scala; other adaptations bring Processing to platforms like the OpenMoko, iPhone, and OLPC XO-1.

Processing was founded by Ben Fry and Casey Reas in 2001 while both were John Maeda’s students at the MIT Media Lab. Further development has taken place at the Interaction Design Institute Ivrea, Carnegie Mellon University, and the UCLA, where Reas is chair of the Department of Design | Media Arts. Miami University, Oblong Industries, and the Rockefeller Foundation have generously contributed funding to the project.

The Cooper-Hewitt National Design Museum (a Smithsonian Institution) included Processing in its National Design Triennial. Works created with Processing were featured prominently in the Design and the Elastic Mind show at the Museum of Modern Art. Numerous design magazines, including Print, Eye, and Creativity, have highlighted the software.

For their work on Processing, Fry and Reas received the 2008 Muriel Cooper Prize from the Design Management Institute. The Processing community was awarded the 2005 Prix Ars Electronica Golden Nica award and the 2005 Interactive Design Prize from the Tokyo Type Director’s Club. 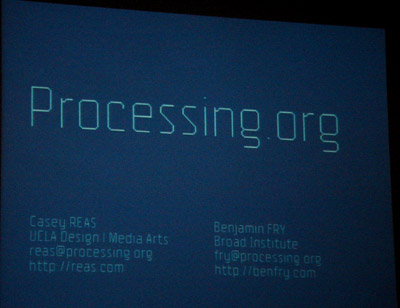