“Michel Waisvisz (born 1949 in Leiden, Netherlands; died 2008 in Amsterdam) was a composer, performer and inventor of electronic musical instruments. He has been the artistic director of STEIM in Amsterdam since 1981, where he has collaborated with musicians and artists from all over the world.

His involvement with STEIM goes back until 1969, when it had been co-founded by his mentor and friend Dick Raaymakers. He has been a vivid member of Amsterdam’s Electric Music Theatre scene of the 1970s, performing intensively and raising critical voices against the upcoming high-tech culture. He co-founded and organised the first sound festival in Holland: “The Claxon Sound Festival”

Outstanding and highly influential to many artists is Waisvisz’ passionate dedication to a physical, bodily approach to electronic music which he has expressed in the use and presentation of his many developments of hardware and software instruments. From his point of view electronic music is created in direct musical interaction with individual technology, allowing for instant travels into sound through improvisation. This directness and multidimensionality in electronic musical practice has been summed up in the expression of “Touch” in an essay together with Joel Ryan and Sally Jane Norman in 1998 […]” wikipedia 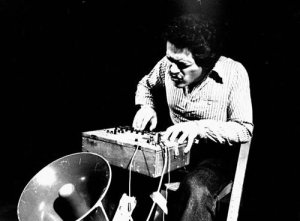