The ‘transmediale parcours’ makes its debut as a ‘pilot’ publication with CONSPIRE. transmediale’s programme booklets have established themselves over the festival’s twenty year history as a widely sought after index of contemporary digital, media and technology based art and culture. Expanding upon this tradition the ‘transmediale parcours’ has been launched to reflect upon the research as well as artistic and critical background behind the particular year’s theme. As a parcours the edition is meant to sketch a conceptually meandering path through the festival’s various segments and as such exists as a stand alone publication with its own character, content and style. 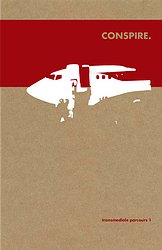