An interactive balloon was designed for the Media Lab’s 10’th anniversary open-house (the “10/10” event on October 10, 1995). This device used a shielded laminate of PVDF piezoelectric foil adhered to an aluminized mylar party balloon to act both as a microphone and loudspeaker (the acoustic characteristics of the balloon contributed considerably to the PVDF’s impedance match to produce a reasonably loud audio output). Up to 4 snippets of audio samples could be recorded into the analog memory on an attached circuit board. The balloon could then be put into an interactive mode, where it would pretrigger upon hearing a sufficiently loud sound, then wait until that sound stopped before responding with one if its audio samples. In this fashion, one could “converse” with the balloon, as it would seem to reply to what you were saying since it waited until you finished speaking before firing its own sound. The circuit board contained many customizable settings, as well as a generic audio input and output so it could be coupled into an external system. 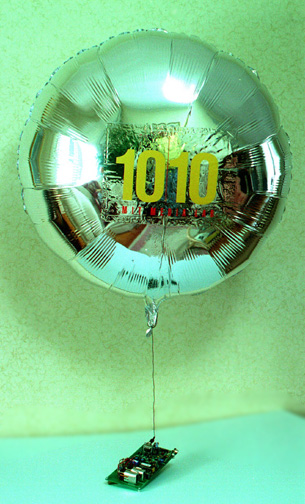