Beginning in the 1950s, Raymond Scott designed and built the first of many very different versions of THE RAYMOND SCOTT ELECTRONIUM, a keyboard-less, automatic composition and performance machine. This invention engaged the attention of Berry Gordy, who hired Scott as Motown’s Director of Electronic Research and Development.

Developed by Raymond Scott in 1959, the Electronium was a large-scale composing machine. As Scott described it: “A composer ‘asks’ the Electronium to ‘suggest’ an idea, theme, or motive. To repeat it, but in a higher key, he pushes the appropriate button. Whatever the composer needs: faster, slower, a new rhythm design, a hold, a pause, a second theme, variation, an extension, elongation, diminution, counterpoint, a change of phrasing, an ornament, ad infinitum …” 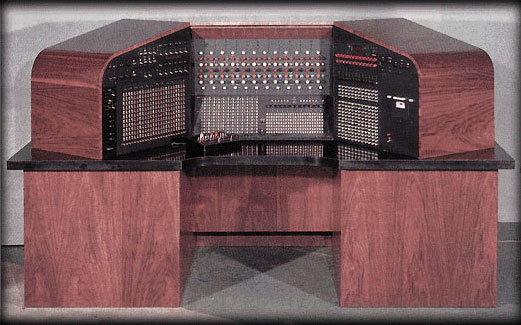 WHERE IS IT NOW?
The version of THE ELECTRONIUM pictured above is now owned by MARK MOTHERSBAUGH, a Raymond Scott Archive Board Member, who plans to restore it. The Electronium’s new home is Mr. Mothersbaugh’s Mutato Muzika Studios, which serves as headquarters for Devo, and his many other music, film, and television projects.