Netmage 08
International Live-media Festival – 8th edition
Bologna, 24>26 January 2008
International Live-media Floor
call for participants
deadline 16 October 2007
The call for participation is now open for the International Live-media Floor of Netmage 08 a festival aimed to explore media
innovation within the context of electronic arts that will take place in Bologna from the 24th to the 26th January 2008.
The Live-media Floor is the main section of the Netmage festival program, an international platform to confront practices of
generating and/or mixing images and sound of every type and format. A window on cinematic and inter-media aesthetics that
change form year by year.
Participation is open to projects that employ electronic, electroacoustic, analogue and cinematic means to produce visuals
and sound.
The projects selected will be performed in a single event space, single or multi-screen, for a duration of about 20 minutes
each.
All material must be sent to:
Netmage, Via Cà Selvatica 4/d, 40123 Bologna, Italy
tel (++39) 051 331099
bando@netmage.it
www.netmage.it
to be received before 16 October 2007.
XING via ca’selvatica 4/d 40123 bologna italy
pressoff@xing.it
www.xing.it www.netmage.it 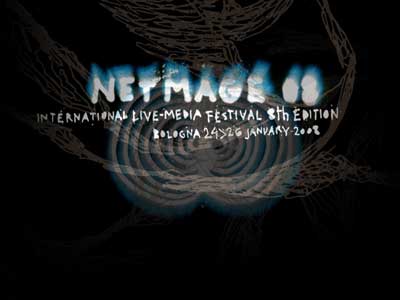