Up-to-now, Lexikon-Sonate consists of 24 music-generation modules (structure generators) which are related in a very complex way as a musical HyperText. Each module generates a specific characteristic musical output as a result of the compositional strategy that has been applied. A module represents an abstract model of a specific musical behaviour. It does not contain any pre-organized musical material, but a formal description of it and the methods how it is being processed.

These modules are structural re-implementations of piano gestures obtained by analysis of piano music from Johann Sebastian Bach, Beethoven, Schönberg, Webern, Boulez, Stockhausen and Cecil Taylor. They will never appear as verbal quotation (because none of this gestures has been “sampled”), but mainly as “allusion”. Furthermore, they are open and generic enough so that different modules playing at the same time can intermingle, creating unpredictable meta-structures.

“The compositions generated by Lexikon-Sonate are surprisingly pleasant and interesting, mainly because of the ingenious manner in which tempo and volume vary and in particular due to a liberal use of pauses and silence. Many composition automatons suffer not from a lack of variety but from an inability to take a breather. Hats off to Herr Essl for this wonderful gift.” (kornball) 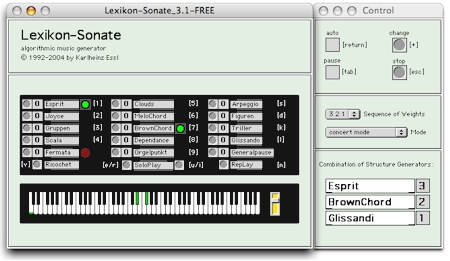