Literal:
“With new developments in biological research, scholars are gaining more accurate information about complex systems such as the brain, and are looking for effective mechanisms to meaningfully represent such information. Since the human brain is pretty good at perceiving and making sense of auditory patterns, using sound and music to sonify complex systems seems to be a promising technique. In collaboration with the Potter Group at the Laboratory for NeuroEngineering at Georgia Tech, we sonified signals from cultured neurons recorded by multielectrode array. As part of the project we attempted to address two main research goals: 1. To produce a generic and meaningful representation of the data that would help understand the activity in the culture. 2. To create a musical product that has an aesthetic value.

Based on computational pattern recognition techniques, the neural activity in the culture was mapped to eight speakers in an effort to represent the spatial propagation of spikes in the culture. We also developed eight percussive controllers that allow players to simulate spike propagation from different locations in the culture. The project was presented as a musical piece titled BrainWaves. The piece starts with automated spatial sound generation based on recorded neural activity, and developes into an interactive section where players use our newly developed controllers to simulate spikes in the cultures in a variety of locations around the concert venue. 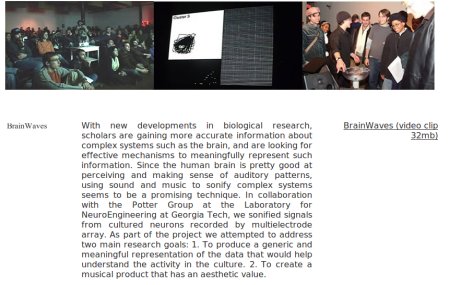