“Beat-Bike v.1 is a bicycle-controlled drum machine. Sensors mounted on a bicycle frame are activated by spinning the bicycle’s front wheel. Once activated, they trigger a momentary sounding of a single drum sound- kick drum, snare, om-tom, and “disco-bleep” from a kids’ toy drum machine. As the wheel spins, the sensors are triggered in a sequence which becomes an audible, repeating drum beat. The rider controls the tempo of the beat as well as the sequence of sounds from controls mounted on the handlebars. Because the sounds are controlled by riding a bicycle, Beat-Bike v.1 rewards exercise and coordination with funky outer-space disco beats. And it’s fun!”. 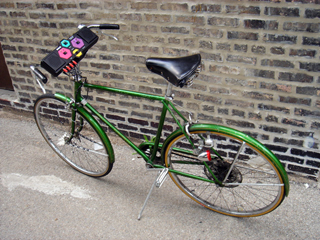